Patents in Australia are legally enforceable and help to protect the intellectual property of a new invention or innovative process.

A patent is a legal right given by the Government to the patentee to exclusively exploit an invention described and claimed in the patent specification.  The patent is granted for a defined period of time.

Do not leave your innovation exposed by filing an ineffective patent application.  Seek professional IP advice and services.

The experts at  Wynnes Patent and Trade Mark Attorneys can assist with providing the right patent protection for your innovation in Australia, New Zealand and overseas.

Wynnes can help you identify and protect your IP assets

If you would like Wynnes to help identify your IP, provide options and recommendations, we are happy to discuss your situation with you in person, over the phone, via email or web chat.

Let us help you grow and protect your business.
We are here to listen, provide assistance and help you protect your important IP assets.

Is your invention patentable?

The invention must also be novel, have an inventive step (or innovative step depending on the type of patent application), be useful and be a manner of manufacture.  The requirements are set out in the Patents Act 1990 and interpreted through the relevant case law.

In effect, the granting of a patent is a reward for introducing new technology into the country.

Advantages of a patenting your invention

If you have developed a niche product or process, you must protect it to own it and control it, so that you can use it to make money by delivering a product that only you can provide.

Furthermore, a patent is a legal right that may be assigned or licensed to others in consideration for an agreed sum of money.

If you have not patented your invention before releasing it to the public, you will surrender any rights that you would have to your innovation.  Public disclosure of an invention will allow your competitors to freely use it for their commercial benefit.  You will not be able to backtrack and apply for a patent for a publicly disclosed innovation at any point in the future.

Prior to receiving your patent acceptance, a Non-Disclosure Agreement (NDA) should be signed before sharing any details of your invention with anyone.

Applying for a Patent in Australia

The patenting process is a dynamic process and the strategy adopted in following a patent program will depend largely on the changing commercial realities of the market place and the relevant technology. At any stage, however, the patenting strategy can be changed and it is recommended that a six monthly review of the situation should be made to confirm whether to proceed to the next stage.

The standard patent specification is published 18 months after the priority date.

After the opposition period has expired and if there are no opposition proceedings pending, the application proceeds to grant and a patent is issued. The term of a standard patent is twenty years from the filing date of the complete patent application. This period may be extended to a further five years in special circumstances.

The period between filing a standard patent application and obtaining a granted patent may vary between one to five years or longer. The variation in the length of time before a patent is granted depends on whether examination is expedited, the number of reports issued, the length of time before a response is filed and whether opposition proceedings are initiated. There may be commercial reasons to accelerate or delay the obtaining of a granted patent for an invention. 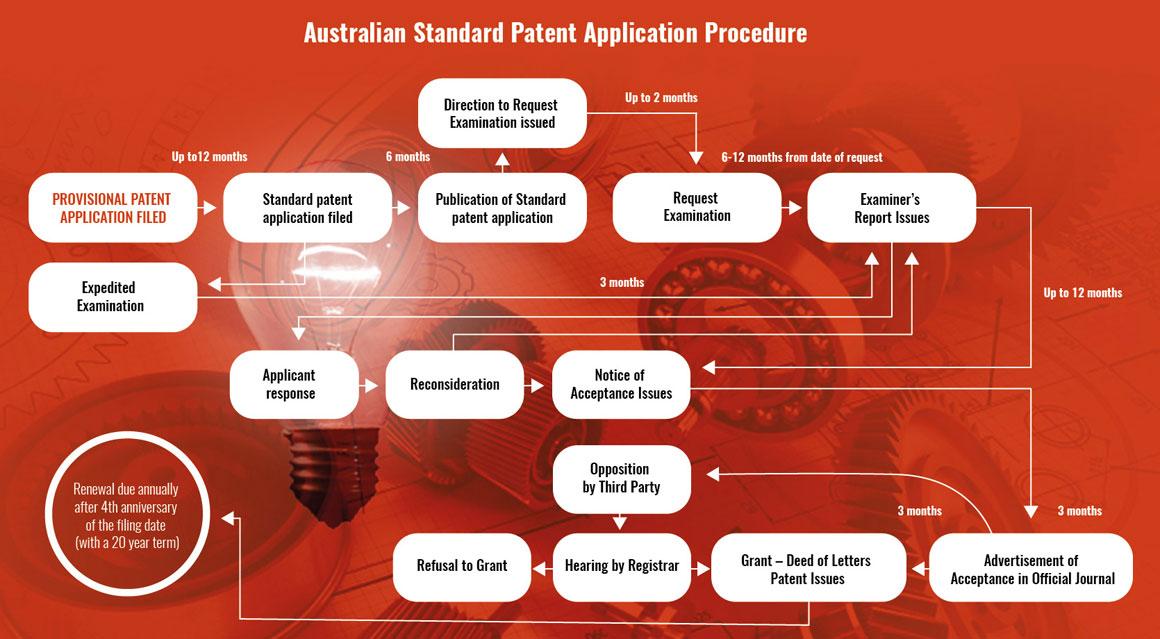 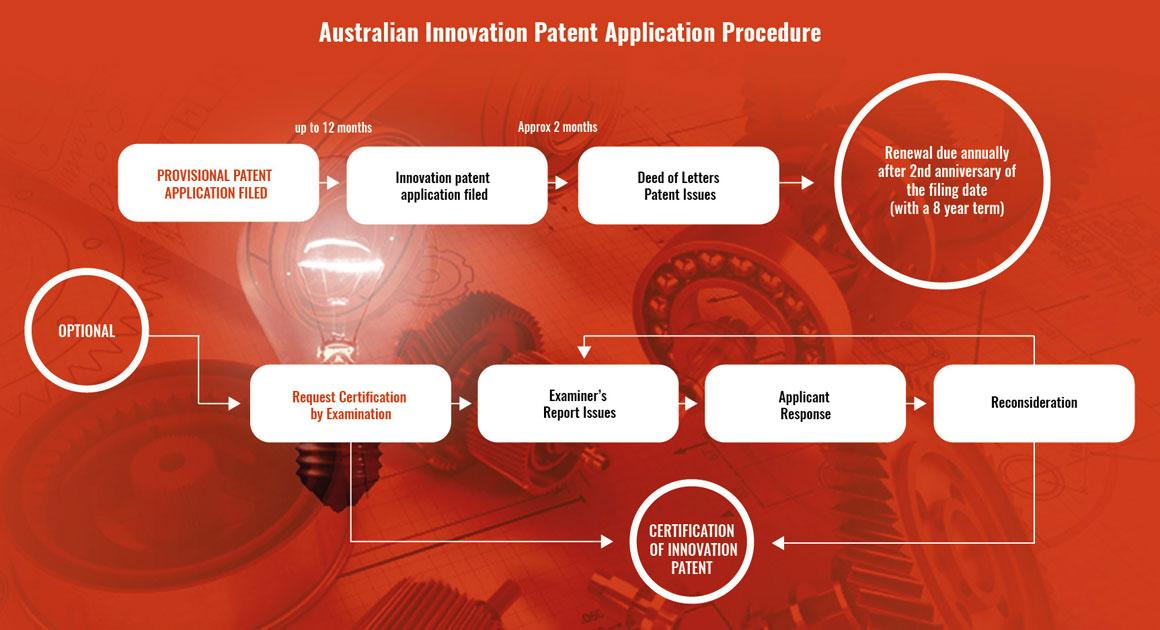 An international patent application is a patent application under the Patent Cooperation Treaty (PCT) that can be filed with the Australian Patent Office and designating one or more of the countries which are party to the Treaty.

There are currently over 145 states party to the PCT including United States of America, Europe, Japan and China.

Advantages of filing an international patent application compared with the filing of an application directly into a designated country include:

Patents are normally granted on a national basis. It is worth noting, however, that a European patent covering 38 member countries (and 2 possible extension states) may be granted from a single regional patent application. Regional patents may be granted in some African countries and some former Soviet states. However, there is no such thing as a world or international patent.

Patent applications in overseas countries are filed through our extensive network of patent associates in each country.

If you have changed a process or look and feel of a product, introduced new product lines, your existing patent may no longer cover your commercialised product.

You will need to reassess whether your existing patent protection covers the new, altered version of the product.

Know what you need to protect

What can you protect to own a technology niche, market position, and unique market presence?